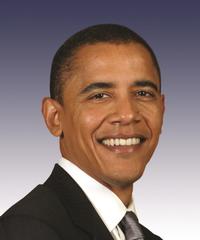 Barack Obama, a Democrat, was the 44th President of the United States from 2009 to 2017. He was previously a senator from Illinois (2005-2008). Born in Honolulu, HI on August 4, 1961, he obtained his early education in Jakarta, Indonesia, and Hawaii before attending Occidental College in Los Angeles. He earned a B.A. in 1983 from Columbia University before working as a community organizer in Chicago, IL. He studied law at Harvard University, where he became the first African American president of the Harvard Law Review, and received his J.D. in 1991 before being a lecturer on constitutional law at the University of Chicago. A member of the Illinois State senate from 1997-2004, he served in the U.S. Senate from January 3, 2005 until November 16, 2008, when he resigned from office, having been elected president.

Let your Member know how you feel about his votes. Here are the best ways to contact Senator Obama’s Senate office: