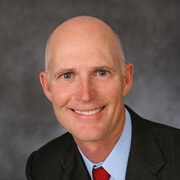 Richard Lynn (Rick) Scott is a Senator from Florida. Born in Bloomington, IL, he earned his B.A. from University of Missouri-Kansas City in 1975 and his J.D. from Southern Methodist University in 1978. He served in the United States Navy from 1971-1974 and was admitted to the Texas bar in 1978, commencing practice in Dallas. He is a founder of multiple companies including a a health care company and served as governor of Florida from 2011-2018 before being elected to the United States Senate in 2018 for the term ending January 3, 2025.

Let your Member know how you feel about his votes. Here are the best ways to contact Senator Scott’s Senate office: