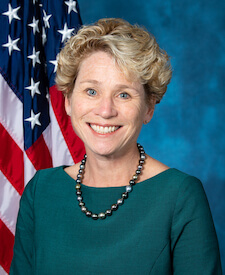 Christina Houlahan is a Representative from Pennsylvania. Born at Naval Air Station Patuxent River, she earned her B.S. from Stanford University in 1989 and her M.S. from Massachusetts Institute of Technology in 1994. She served in the United States Air Force from 1989-1991 and the United States Air Force Reserve from 1991-2004. She served in Teach for America Corps, was an engineer, business executive, and non-profit executive before being elected to the 116th Congress (January 3, 2019-present).

Let your Member know how you feel about her votes. Here are the best ways to contact Representative Houlahan’s Congressional office: