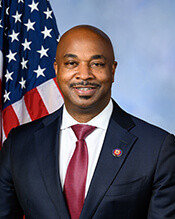 Kwanza Hall was born in Atlanta, GA and graduated from Benjamin E. Mays High School in 1989. He attended the Massachusetts Institute of Technology from 1989–1995 before becoming a civil servant, public advocate and business executive. He was a member of the Atlanta board of education from 2002–2005 and a member of the Atlanta city council from 2005–2017 before being elected as a Democrat to the 116th Congress, by special election, to fill the vacancy caused by the death of United States Representative John R. Lewis (December 1, 2020–January 3, 2021).

Let your Member know how you feel about his votes. Here are the best ways to contact Representative Hall’s Congressional office: