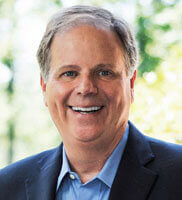 Doug Jones is a Senator from Alabama. Born in Fairfield on May 4, 1954, he earned his B.S. from the University of Alabama in 1976 and his J.D. from Samford University, Cumberland School of Law in 1979. He served as staff counsel to Alabama senator Howell Heflin on the U.S. Senate Committee on the Judiciary and assistant U.S. attorney for the Northern District of Alabama from 1980-1984. Jones practiced law in Birmingham as U.S. attorney for the Northern District of Alabama from 1997-2001 and was elected as a Democrat to the United States Senate in a special election on December 12, 2017 to fill the vacancy caused by the resignation of Jeff Sessions, a seat subsequently held by appointed senator Luther Strange, for the term ending January 3, 2021. He took the oath of office on January 3, 2018.

Let your Member know how you feel about his votes. Here are the best ways to contact Senator Jones’s Senate office: