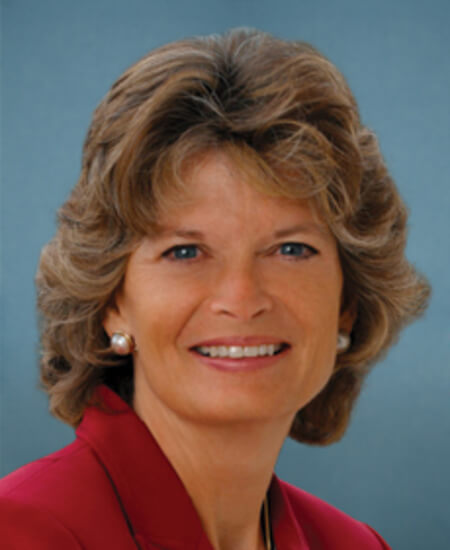 Lisa Murkowski (daughter of Frank Hughes Murkowski) is a Senator from Alaska. Born in Ketchikan, Alaska, in 1957, she attended public schools in Fairbanks, AK before atending Williamette University in Salem, OR, from 1975-1977; earning a B.A. in Economics from Georgetown University in 1980; and a J.D. from Willamette College of Law in 1985. She served as the Anchorage District Court attorney from 1987-1989, on the Mayor's Task Force on the Homeless from 1990-1991, and on the Anchorage Equal Rights Commission from 1997-1998. She served in the Alaska State house of representatives from 1999-2002 and was appointed to the U.S. Senate on December 20, 2002, to fill the vacancy caused by the resignation of her father, Frank H. Murkowski. She was elected to the U.S. Senate in 2004; an unsuccessful candidate for renomination in 2010, but subsequently elected as a write-in candidate in the November 2, 2010, general election, for the term ending January 3, 2017. She was the Republican Conference vice-chair (2009-2010) and the chair of the Commmittee on Energy and Natural Resources (114th Congress).

Let your Member know how you feel about her votes. Here are the best ways to contact Senator Murkowski’s Senate office: