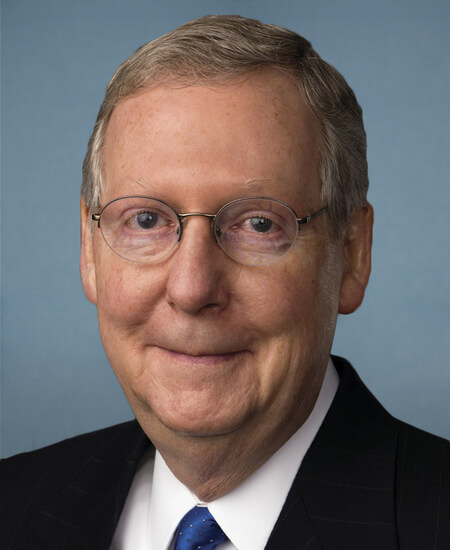 Addison Mitchell (Mitch) Mcconnell is a Senator from Kentucky. Born in Tuscumbia, AL, in 1942, he graduated from the University of Louisville in 1964 and the University of Kentucky Law School in 1967 before being admitted to the Kentucky bar in 1967. He worked as a legislative assistant to Senator Marlow Cook from 1968-1970, Deputy Assistant United States Attorney for Legislative Affairs from 1974-1975, Acting Assistant Attorney General in 1975; and elected judge-executive of Jefferson County, KY from 1978-1985. He was elected to the United States Senate in 1984. He has served as Republican party whip (2003-2007); minority leader (2007-2015); majority leader (2015-present); chair, Select Committee on Ethics (104th Congress), National Republican Senatorial Campaign Committee (105th through 106th Congresses); Committee on Rules and Administration (106th Congress, 107th Congress).

Let your Member know how you feel about his votes. Here are the best ways to contact Senator McConnell’s Senate office: