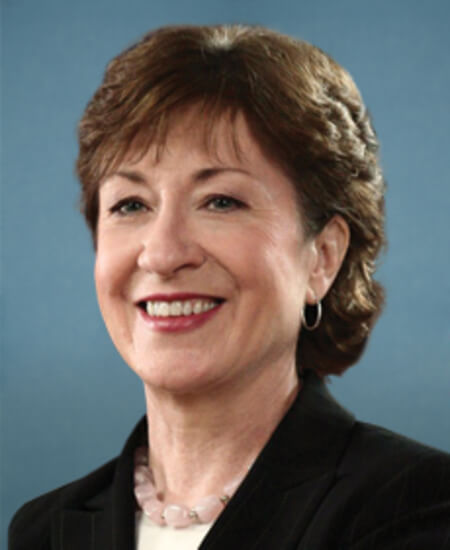 Susan Margaret Collins is a Senator from Maine. Born in Caribou, ME, in 1952, she graduated from St. Lawrence University in 1975 and worked for United States Senator William S. Cohen from 1975-1987, serving as staff director of the Senate Governmental Affairs Subcommittee on the Oversight of Government Management from 1981-1987. She was commissioner of the Maine Department of Professional and Financial Regulation from 1987-1992 and New England regional director, United States Small Business Administration in 1992. She was deputy state treasurer of Massachusetts in 1993 and won an eight-way Republican primary to become the first woman nominated for governor of Maine in 1994, but lost general election. In 1996, she was elected to the United States Senate. She chaired the Committee on Governmental Affairs (108th Congress), Committee on Homeland Security and Governmental Affairs (109th Congress); and the Special Committee on Aging (114th Congress).

Let your Member know how you feel about her votes. Here are the best ways to contact Senator Collins’s Senate office: