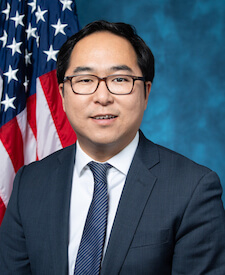 Andy Kim is a Representative from New Jersey. Born in Boston, MA, he attended Deep Springs College from 2000-2002 and earned his B.A. from the University of Chicago in 2004. He was a Rhodes Scholar and earned his Ph.D. from Oxford University in 2010. He worked on staff for the United States Agency for International Development in 2005, the United States Department of State from 2009-2013, the United States Department of Defense in 2013, and the National Security Council from 2013-2015. He was elected to the 116th Congress (January 3, 2019-present).

Let your Member know how you feel about his votes. Here are the best ways to contact Representative Kim’s Congressional office: