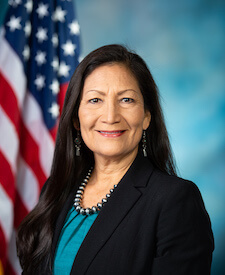 Debra Haaland was a Representative from New Mexico. Born in Winslow, AZ, a registered member of the Laguna Pueblo, she earned her B.A. from the University of New Mexico in 1994. She attended University of California, Los Angeles in 2000 and earned her J.D. from the University of New Mexico in 2006. She was a business executive and tribal administrator, San Felipe Pueblo, from 2013-2015. She was chair of the New Mexico Democratic Party from 2015-2017 and elected to the 116th Congress until her confirmation at Secretary of the Interior (January 3, 2019-March 16, 2021).

Let your Member know how you feel about her votes. Here are the best ways to contact Representative Haaland’s Congressional office: