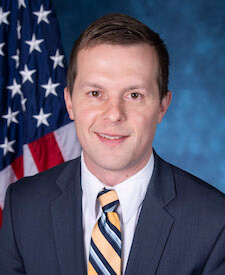 Jared Golden is a Representative from Maine. Born in Lewiston, ME, he attended the University of Maine from 2001-2002 and earned his B.A. from Bates College in 2011. He served in the United States Marines Corps from 2002-2006 and was on staff for the United States Senate Committee on Homeland Security and Governmental Affairs from 2011-2012. He also served on staff for United States Senator Susan Collins of Maine in 2013 and on staff in the Maine state house of representatives from 2013-2014. He was a member of the Maine state house of representatives from 2014-2019 and elected to the 116th Congress (January 3, 2019-present).

Let your Member know how you feel about his votes. Here are the best ways to contact Representative Golden’s Congressional office: