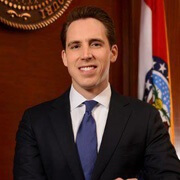 Joshua David (Josh) Hawley is a Senator from Missouri. Born in Springdale, AR, he earned his B.A. in history from Stanford University in 2002 and his J.D. from Yale Law School in 2006. He was a law clerk to Judge Michael W. McConnell, United States Court of Appeals, Tenth Circuit; and a law clerk to Chief Justice of the United States John Roberts. He was a lawyer, law professor, and attorney general of Missouri from 2017-2018 before being elected to the United States Senate in 2018 for the term ending January 3, 2025.

Let your Member know how you feel about his votes. Here are the best ways to contact Senator Hawley’s Senate office: