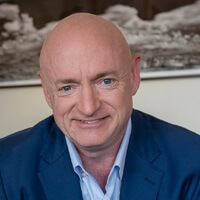 Mark Kelly is a Senator from Arizona. Born in Orange, NJ, he graduated from Mountain High School in West Orange in 1982 and earned his B.S. in marine engineering and nautical science from the U.S. Merchant Marine Academy in 1986. He was awarded his M.S. in aeronautical engineering from the U.S. Naval Postgraduate School in 1994 and was a naval aviator in the U.S. Navy from 1987-2012, where he attained the rank of captain. Kelly served in Operation Desert Storm during the First Gulf War, receiving numerous awards, including the Legion of Merit and the Distinguished Flying Cross. He joined the U.S. space program as a member of the NASA Astronaut Corps in 1996, flying four missions into space and living aboard the International Space Station.

A space exploration company owner and non-profit organization founder, he was elected as a Democrat to the United States Senate in a special election on November 3, 2020, to fill the vacancy caused by the death of Sen. John McCain, a seat subsequently held by appointed senators Jon Kyl and Martha McSally, for the term ending January 3, 2023. He took the oath of office on December 2, 2020.

Let your Member know how you feel about his votes. Here are the best ways to contact Senator Kelly’s Senate office: