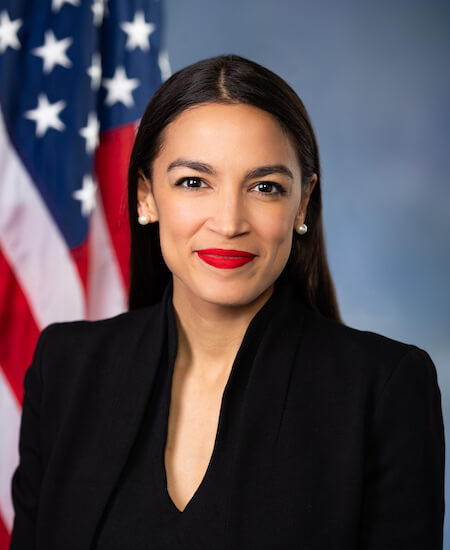 Alexandria Ocasio-Cortez is a Representative from New York. Born in Bronx County, NY, she earned her B.A. from Boston University in 2011. She was a bartender and community organizer before defeating longtime Representative Joe Crowley to be elected to the 116th Congress (January 3, 2019-present).

Elected with the support of the progressive organization Justice Democrats, Ocasio-Cortez (often called AOC) gained national attention for introducing the "Green New Deal," a wide-ranging environmental blueprint that has been estimated to cost up to $93 trillion, spending on a wide range of priorities. She is a member of "The Squad," a group of progressive legislators that includes Ocasio-Cortez, Ilhan Omar of Minnesota, Ayanna Pressley of Massachusetts, and Rashida Tlaib of Michigan and has publicly feuded with President Donald Trump.

Let your Member know how you feel about her votes. Here are the best ways to contact Representative Ocasio-Cortez’s Congressional office: