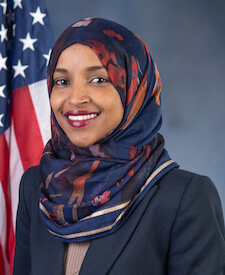 Ilhan Omar is a Representative from Minnesota. Born in Mogadishu, Somalia, she earned her B.A. from North Dakota State University in 2011 and her B.S. from North Dakota State University in 2011. She was a teacher, campaign manager, and non-profit executive. She served on staff for the Minnesota department of education from 2012-2013 and on staff for the Minneapolis city council from 2013-2015. She was a member of the Minnesota state house of representatives from 2017-2019 before being elected to the 116th Congress (January 3, 2019-present). She is a member of "The Squad," a group of progressive lawmakers including herself, Alexandria Ocasio-Cortez of New York, Ayanna Pressley of Massachusetts, and Rashida Tlaib of Michigan

Let your Member know how you feel about her votes. Here are the best ways to contact Representative Omar’s Congressional office: