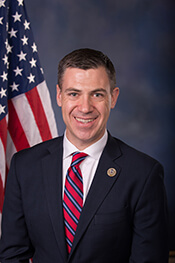 James E. (Jim) Banks is a Representative from Indiana. Born in Columbia City, Indiana from 1979, he earned his B.A. from Indiana University in 2004 and his M.B.A. from Grace College and Seminary in 2013. He served in the United States Navy Reserve from 2012-2015, was on staff for United States Representative John Hostettler of Indiana, worked as a commercial real estate broker, political consultant, chairman of the Whitley County, Indiana Republican Party from 2007-2011, was a member of the Whitley County, Indiana Council from 2008-2010, and was a member of the Indiana state senate from 2010-2016. He was elected as a Republican to the 115th Congress (January 3, 2017-present).

Let your Member know how you feel about his votes. Here are the best ways to contact Representative Banks’s Congressional office: